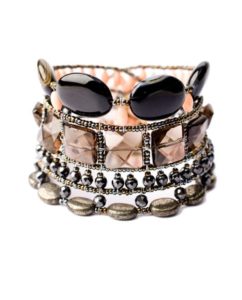 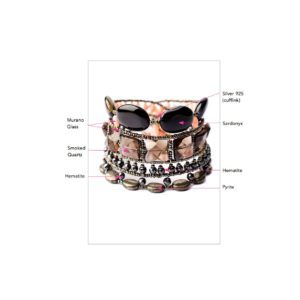 Hematite, also spelled as haematite, is the mineral form of one of several iron oxides.

The spectral signature of hematite was seen on the planet Mars by the infrared spectrometer on the NASA Mars Global Surveyor (“MGS”) and 2001 Mars Odyssey spacecraft in orbit around Mars.

Hematite’s popularity in jewelry was at its highest in Europe during the Victorian era.

Hematite is used to improve relationships. If you need your personal relationship to be better, carry a hematite with you always.

Hematite stimulates iron absorption in the small intestine, which in turn improves oxygen supply to the body.

Symbolic:
With the help of an arrowhead, Cupid had one day cut off the nails (onux) of Venus asleep.
He dropped on the sand these drops of nails, which the Parques metamorphosed into stone. For what comes from a celestial body must not perish.

Quartz is a mineral composed of silicon and oxygen atoms.

There are many different varieties of quartz, several of which are semi-precious gemstones. Since antiquity, varieties of quartz have been the most commonly used minerals in the making of jewelry and hardstone carvings, especially in Eurasia.

Sardonyx is a gemstone having bands of red sard; a variety of onyx or chalcedony.

Onyx is formed of bands of chalcedony in alternating colors. It is cryptocrystalline, consisting of fine intergrowths of the silica minerals quartz and moganite. Its bands are parallel to one another, as opposed to the more chaotic banding that often occurs in agates.

Sardonyx is a variant in which the colored bands are sard (shades of red) rather than black. Black onyx is perhaps the most famous variety, but is not as common as onyx with colored bands.

Sardonyx is a stone of strength and protection. Use it to enhance willpower, integrity, stamina and vigor.
It is believed to bring lasting happiness and stability to marriage and partnerships. It attracts friends and good fortune.