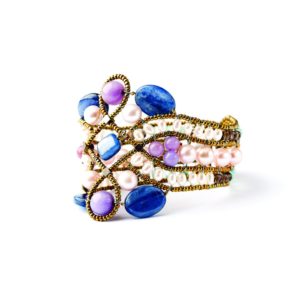 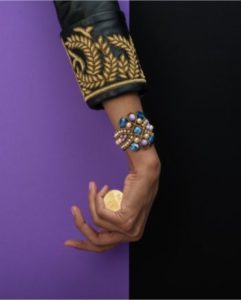 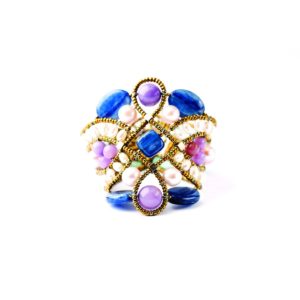 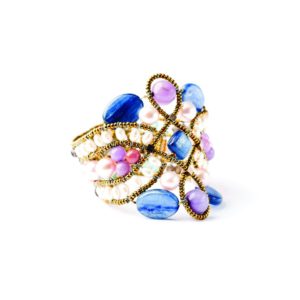 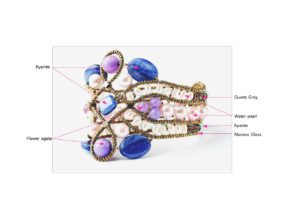 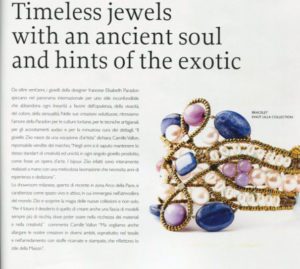 This jewel is handmade, which makes it unique. Like every woman who wears it.

Apatite is infrequently used as a gemstone. Transparent stones of clean color have been faceted, and chatoyant specimens have been cabochon-cut. Chatoyant stones are known as cat’s-eye apatite, transparent green stones are known as asparagus stone, and blue stones have been called moroxite. If crystals of rutile have grown in the crystal of apatite, in the right light the cut stone displays a cat’s-eye effect.

Apatite is an inspirational stone. It develops psychic abilities and spiritual attunement. Use it to aid communication and self-expression.

This is a cryptocrystalline variety of silica, chiefly chalcedony, characterised by its fineness of grain and brightness of color. Although agates may be found in various kinds of rock, they are classically associated with volcanic rocks and can be common in certain metamorphic rocks.

Agates attract strength. Agate is a protection from bad dreams. It also protects from stress and energy drains. Agates have been used in jewelry since Biblical Babylonian times. They were used to ward off storms. They were prized gems in antiquity. The agates with banded colors were placed at the head of a sleeper to give rich and varied dreams. Agates have been thought to be good to harden the gums.

Kyanite is an interesting gem that was discovered during the nineteenth century. The most highly prized kyanite is the vibrant blue or blue-green hue. It is also found in shades of gray, yellow, white and a colorless variety that is considered quite rare.

It was once believed that a kyanite suspended from a human hair could follow the earth’s magnetic force. Early travellers sometimes used it as a compass when exploring unknown territories.

The fan like clusters or blades that are formed by kyanite make it an ideal stone for restoring energy balance. It is a very effective energy conduit that can balance most systems of the body. It can quickly create stillness and tranquility, making it an excellent stone for meditation.

Kyanite is found in mountainous regions in the United States (Montana and North Carolina), Switzerland, Brazil and Myanmar.

Quartz is a mineral composed of silicon and oxygen atoms.

There are many different varieties of quartz, several of which are semi-precious gemstones. Since antiquity, varieties of quartz have been the most commonly used minerals in the making of jewelry and hardstone carvings, especially in Eurasia.

Smoky quartz is a gray, translucent version of quartz. It ranges in clarity from almost complete transparency to a brownish-gray crystal that is almost opaque. Some can also be black.

Smokey quartz is nature’s stone of endurance. If you need a extra boost, carry a smokey quartz gemstone with you.
It promotes personal pride and joy in living – Creativity in business – Opens the path for perception and learning.

You can adjust the size this handmade bracelet by moving the Ziio cufflink
If you need a particular size, please contact us at customercare@ziio.eu